We Are The Press

In light of events in recent years, it’s clear to me that people are taking one particular action into their own hands… 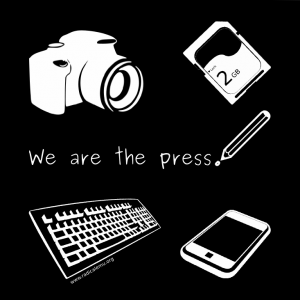 I’ve never been one to blindly believe what I read or see on the news, but the first time this thought really came to the front of my mind was during the G20 protests in 2009 when, sadly, Ian Tomlinson lost his life. Video evidence taken on mobile phones contradicted the statements given by the police after the event. Of all the coverage the press gave afterwards, The Guardian gave probably the best coverage of these events, but not without vital evidence from the public.

In the past we would have had to have taken their word for it, to a degree, but now there was a new weapon in the fight for justice. You.

The thing that struck me was, after years of seeing only what the newsrooms would give you, we could now see from the angle of the ordinary person on the street. The protester/bystander can now attend an event, and from the palm of their hand film and upload crucial moments, and give ongoing updates via social networks.

The news relies on our phones being handy. More and more footage is coming from us, not them.

We have the power.

We are the press.

This entry was posted in Images. Bookmark the permalink.

1 Response to We Are The Press