Web Monitoring Law In The UK

Allow me to introduce Deb*. 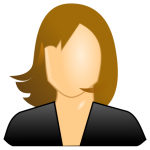 Deb is a faceless minion of the British Government, employed to ensure you are all sat still, being quiet and, most importantly of all, behaving yourself.

You see, this government is not content with watching you as you walk through the streets. All they see is a lot of people doing mundane, everyday things (See Big Brother Is Watching you…). That must mean that the naughty things happen in the home. But, what do naughty people use to be naughty in the home?

Is it the TV?
No, the TV only shows what they deem to be acceptable. Sit down, relax, watch some Friends and be safe in the knowledge that you won’t make a ripple in the great pond of society.

Is it the radio?
No, the radio is there to keep you singing along to acceptable, bland, meaningless songs. They even hype up the ‘artists’ as being attractive so you can watch them on TV too. Two-for-one, bargain.

Is it the internet?
Ah. You’re on to something here. Anything can happen on the internet, and they don’t like that.

You see, the internet is not just there for cat videos, stalking celebrities and sharing drunken photos on Facebook (your boss secretly looks at your profile. You know that, right?). The internet is also used for a whole host of horrible, unimaginable things such as file sharing, terrorism, paedophilia, protest organisation** etc… Someone obviously crossed the line when Lady GaGa’s sales were not in line with the forecasts.

So we come to find ourselves on the verge of a law that will allow the government access to email, sms, web and phone data.

I often wonder what actually goes on when these proposed laws get dreamed up.

“How do we cope with this new threat? Can we have cameras in each and every home?
No, that’s a little toooo Orwellian.

Can we have patrols knocking on doors to join people while they watch “Cat falls off sofa #364”?
We cannot have our law enforcers looking at cute, fluffy things. They could get distracted.

Can we have undercover operatives working on forums?
We already do.¹

You know, it’s not really enough to WANT to know everything, we MUST know everything. Can we have access to EVERYONE’s browser history, emails, SMS messages and phone calls?
Er, that will cost billions.

Can we not just blame it all on terrorists and paedophiles to get public support?
I’ll start drafting a bill.

Fantastic news! The record companies will be thrilled when they hear this.“

OK, so not a real conversation, but you get the picture.

More seems to be done in the UK to stop people listening to music they didn’t buy, than to stopping the sorts of things that are actually affecting the people of the country. The very fact that SOCA are involved in cases of individual downloading² shows just how much the government puts companies before people.

I was pleased to see a twitter campaign (it’s a start…) instantly spring up on this subject, called #telldaveeverything. I even used that as a way to introduce Deb to the world. 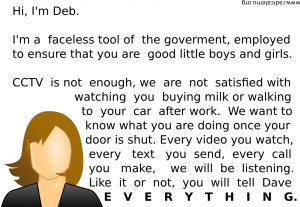 However, tweet all you want, it only goes so far. Even Tim Berners-Lee (you know, the man who invented the World Wide Web) says people should take to the streets³ over this.

We are in danger of having government surveillance that dictatorships around the world would be jealous of. I seriously hope we do not let this happen.

*Deb is named after the Digital Economy Bill (DEB), a landmark in intrusive, civil liberty-crushing legislation dreamed up by the pseudo-socialist New Labour party, and rushed into law without as much as a proper debate in the Commons. I created an image relating to the DEB. but didn’t like the finished product enough to put online.

** Not trivialising terrorism or paedophilia, just pointing out that the powers that will come in to force will not differentiate too much between something major and something much more minor.